Ulmus ‘Louis van Houtte’ (Syn. Ulmus ‘Vanhouttei’) is believed to have been first cultivated in Ghent, Belgium circa 1863.

Ulmus ‘Louis van Houtte’ (Syn. Ulmus ‘Vanhouttei’), when young, the tree has leaves entirely yellow, a colour retained throughout summer. However, as the tree ages, the colouring may begin a gradual reversion to green. A mature specimen which retained its yellow colouration in the crown stood in Edinburgh’s Royal Circus Gardens till the early 1990s.[6] The vertically fissured bark of mature trees is unlike that of English elm, with its squarish scaly fissuring. ‘Louis van Houtte’ has smaller leaves than the not dissimilar Ulmus glabra ‘Lutescens’ (Golden Wych Elm). 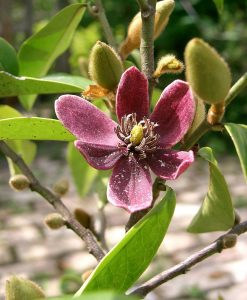